Addressing the issue of climate change is a political priority both nationally and internationally. The Paris Agreement, which aims to slow down the pace of climate change (with i.a. a maximum increase in the global average temperature to well below 2 °C above pre-industrial levels by 2100) by reducing CO2 emissions, is definitely one of its key components. In their Declaration signed in Mannheim on 17 October 2018, the transport ministers of the Member States of the Central Commission for the Navigation of the Rhine (CCNR - Germany, Belgium, France, Netherlands, Switzerland) also reasserted the objective of largely eliminating greenhouse gases and other pollutants by 2050.

To further improve the environmental sustainability of inland navigation on the Rhine and inland waterways, the Mannheim Declaration tasked the CCNR to develop a roadmap to:

The aforementioned Declaration also tasked the CCNR to take the initiative in developing new financial instruments to achieve the said objectives.

On 28 November 2018, the European Commission presented its strategic long-term vision for a prosperous, modern, competitive and climate-neutral economy by 2050 - A Clean Planet for All, asking for a European policy on the reduction of greenhouse gas emissions towards climate neutrality in 2050 for all transport modes including the inland navigation sector. In addition, the May 2018 Communication “A Europe that protects: Clean air for all” from the European Commission provides the policy framework for the reduction of air pollutant emissions such as NOx and Particulate Matter, covering, amongst other sectors, the transport sector.

The European Commission’s Green deal for Europe,of December 2019 and its “Smart and Sustainable Mobility Strategy” of December 2020, lay out priority policy areas, one of these being sustainable mobility, and actions to be realised to achieve climate neutrality by 2050.

Finally, the Ministerial Declaration “Inland Navigation in a Global Setting” adopted in 2018 in Wroclaw under the auspices of the UNECE also stresses the importance of emission reduction for the future of inland navigation .

In this context, there is no doubt that all modes of transport shall make their transition towards zero-emission. The urgency is high for the Inland Waterways Transport (IWT) sector to develop measures to realise this transition, both for air pollutant emissions, which have attracted the most attention since 2014, but also greenhouse gases, which came into focus more recently.

To achieve these core environmental objectives, the same Mannheim Declaration stresses the need for new and updated financial instruments, since existing funding and financing mechanisms have so far not delivered the expected results. The Declaration entrusted the CCNR with the task of leading this development.

Realisation of a preparatory study

To accomplish this task, it was decided to launch a preparatory study, to be carried out by EICB (Expertise- en InnovatieCentrum Binnenvaart) and involving many stakeholders.

Building on the question “how to finance the energy transition of the IWT sector?” and the list of factors in the field, the preparatory study was to identify a series of key research questions, based on interviews with as many of the stakeholders as possible (profession, EU institutions, financing institutions, national administrations, etc…):

On the basis of the results of the preparatory study and the research questions collected, the CCNR’s plenary session in May 2019 was an important first step in the implementation of the Mannheim Declaration by deciding to launch an in-depth CCNR study on the “Financing of energy transition towards a zero-emission European inland navigation sector”.

Two other parallel studies, supported by the Netherlands and Switzerland, were to accompany this main study and deal respectively with:

These three complementary studies form part of the overarching study project and should not be considered as stand-alone studies.

The main objectives of this overarching study project read as follows:

The overall study structure can be illustrated as follows: 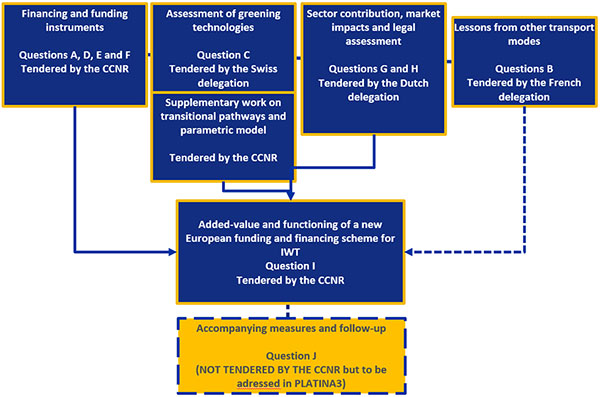 This structure was designed with two objectives in mind:

Three studies were therefore conducted in parallel, forming part of the overall CCNR study project on energy transition towards a zero-emission inland navigation sector, and relating to:

The timeline can be described as follows:

prescribing the publication of the final study results. Those results do not prejudge the Central Commission's and its Member States’ position.

They consist in the publication of the following documents:

While the energy transition is an existential challenge for Rhine and European navigation, it is however accompanied by technological uncertainties and considerable costs, currently estimated at several billion euros, which cannot be borne by the profession alone.

In this context, the CCNR took note of the findings of the study, conducted in close consultation with the major European inland navigation players. In particular, the CCNR acknowledges the important role that a European funding and financing instrument, combining public and private means, could play to support the inland navigation sector’s energy transition. Such a mechanism should be accessible on the same conditions to all CCNR member state vessel owners.

Possessing as it does a European dimension, the CCNR considers this study to be a major step towards the implementation of the Mannheim Declaration and welcomes its pioneering role on discussions related to the financing of the energy transition.

The conclusions of the study represent a major influencing input to the commencement of discussions at Rhine, European and international level a European subsidy and financing mechanism for the energy transition. The CCNR reiterated its willingness to participate in these important exchanges, in conjunction with the profession, European institutions, financing institutions and national administrations, and also in the context of the PLATINA 3 project.

Authors of the studies